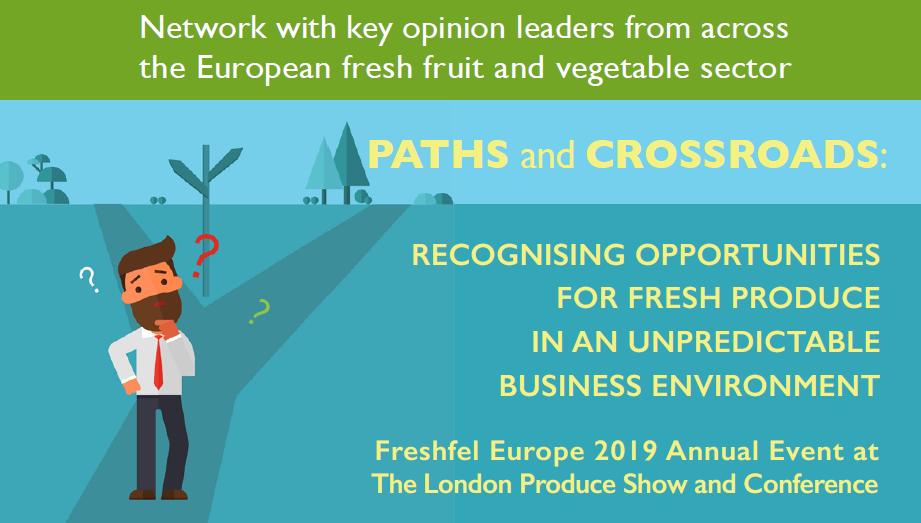 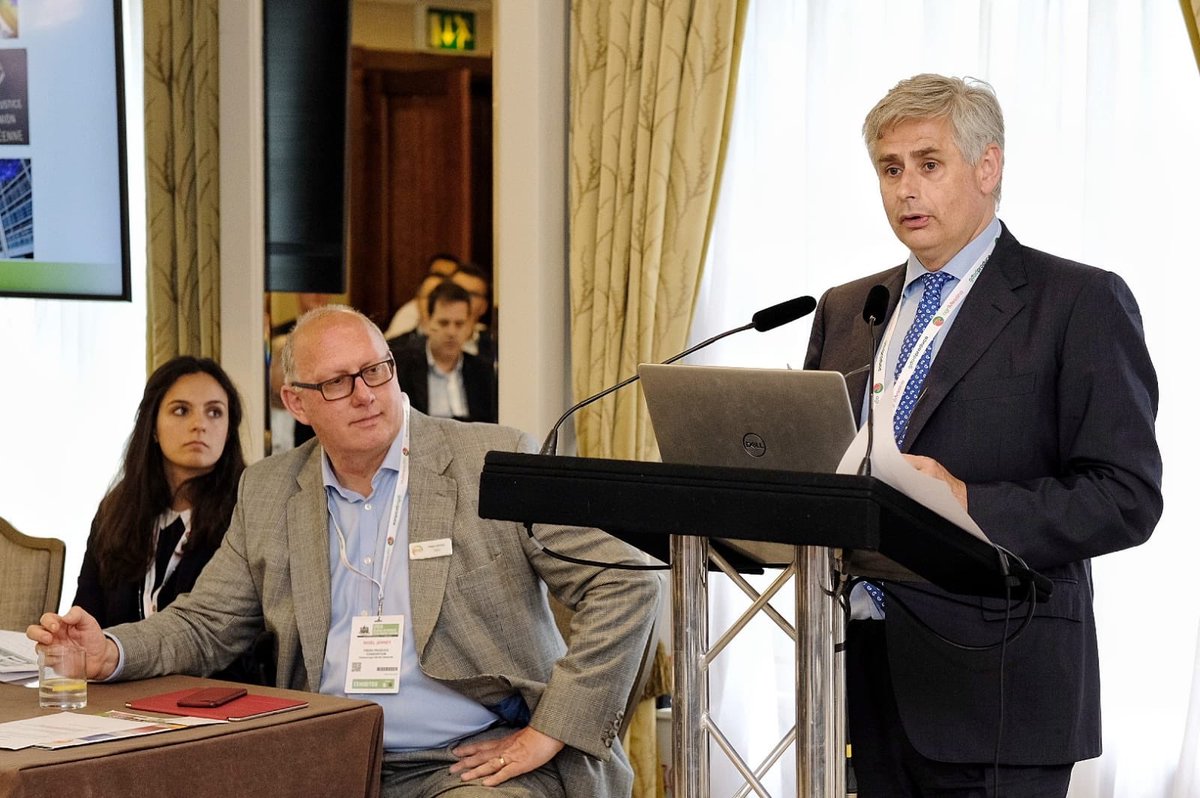 On 5 June 2019 leading fresh produce stakeholders from across Europe gathered at Freshfel Europe’s 2019 Annual Event to analyse the driving forces for opportunities in the current unpredictable business environment for the fresh produce sector. The Annual Event showcased Freshfel Europe’s work in paving the way for opportunities in the current unpredictable business environment through promotion and trade initiatives. As part of the Annual Event’s focus on European fruit and vegetable promotion policy and high profile campaigns, Freshfel Europe presented their soon to be launched EU-wide social media campaign Follow me to be Healthy!, a joint campaign with Aprifel funded by the European Commission. Freshfel Europe delegates also listened to guest speakers from Kantar and the Food Foundation on sustainable diets and the latest successful promotion campaigns in the UK.

The joint Fresh Produce Consortium-Freshfel Europe Seminar on Trading with the UK in the afternoon highlighted the role of trade within Europe for the fresh produce sector, which across the EU-28 Member States represents more than 32 million tonnes of fresh produce. Participants were given advice on how to prepare for the EU’s evolving relationship with the UK and generally in regards to the current turbulent global production and trade environment. Additionally, Freshfel Europe delegates attended The London Produce Show and Conference’s Perishable Pundit’s Thought Leader Breakfast on the 6 June before participating in the trade show and exhibition. More information about the 2019 Annual Event is available in the press release and on the Freshfel Europe website. Twitter coverage of the Annual Event is also available here. 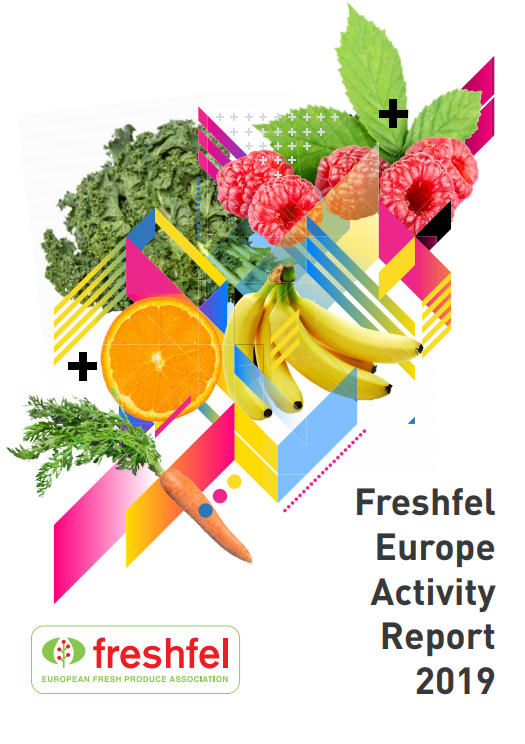 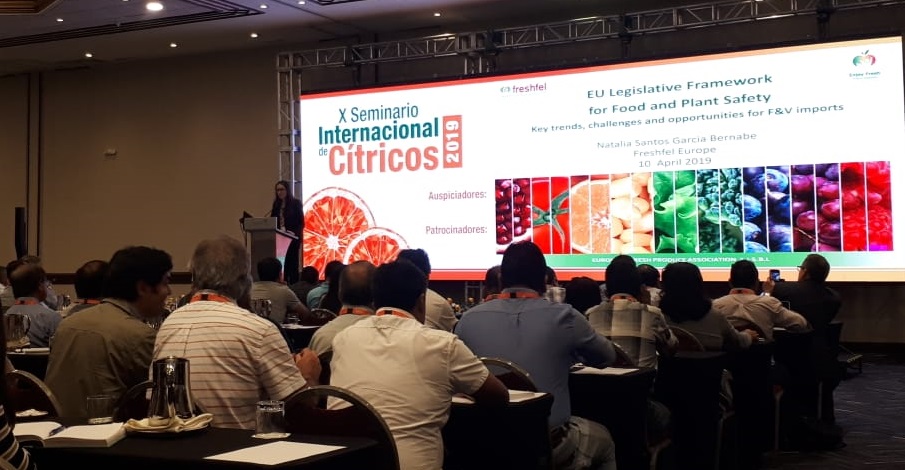 The tenth Seminar of Procitrus, the Citrus Growers’ Association of Peru, took place in Lima on 9-10 April and was attended by over 400 delegates. The event covered a wide range of topics related to the citrus sector, including the latest production, global trade and consumption trends with a focus on the promotion of exports in emerging markets, such as Asian countries. The two-day workshop also tackled a number of technical issues, including biosecurity, with a focus on the prevention and mitigation of citrus greening. On the second day of the conference, Freshfel Europe Policy Advisor Natalia Santos-Garcia Bernabe presented an overview of the EU legislative framework for fruit and vegetable imports, where she outlined the main EU food safety and plant health requirements. The presentation focused on the latest developments with regard to active substances and MRLs in Europe as well as the new obligations introduced in the latest plant health legislation and the main biosecurity hotspots for citrus imports. Freshfel Europe’s presentation can be found here. 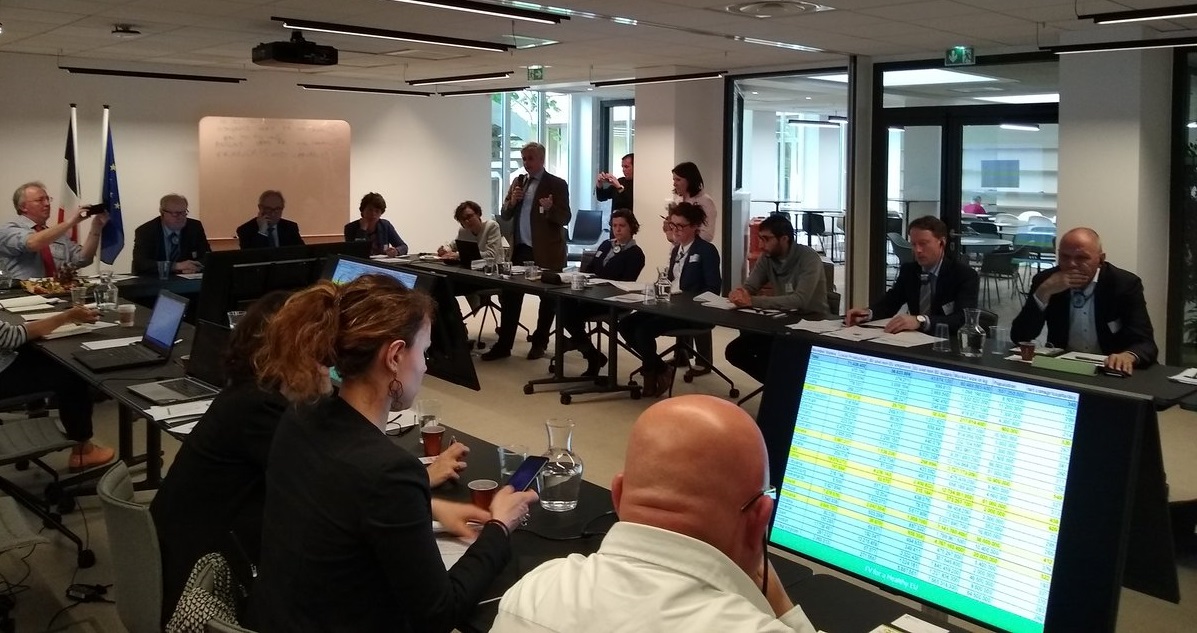 On 8 April 2019 Freshfel Europe co-organised a Promotion meeting in Paris with Interfel, the French Interbranch Association for the fresh fruit and vegetable sector. The objective of the meeting was to gather all interested actors from the different Member States to discuss current opportunities for participating in the European Promotion Policy for agricultural products. During the morning session, Freshfel Europe presented an overview of consumption trends and challenges in the fruit and vegetable sector as well as a detailed analysis of current promotion campaigns and an overview of communication goals and targets. During an interactive afternoon session, these different goals and targets were discussed among the participants who showed interest in launching a proposal to the next call for proposals in 2020. Since the beginning of 2019 Freshfel Europe has been coordinating an EU Promotion programme focused on fruit and vegetable consumption in millennials. 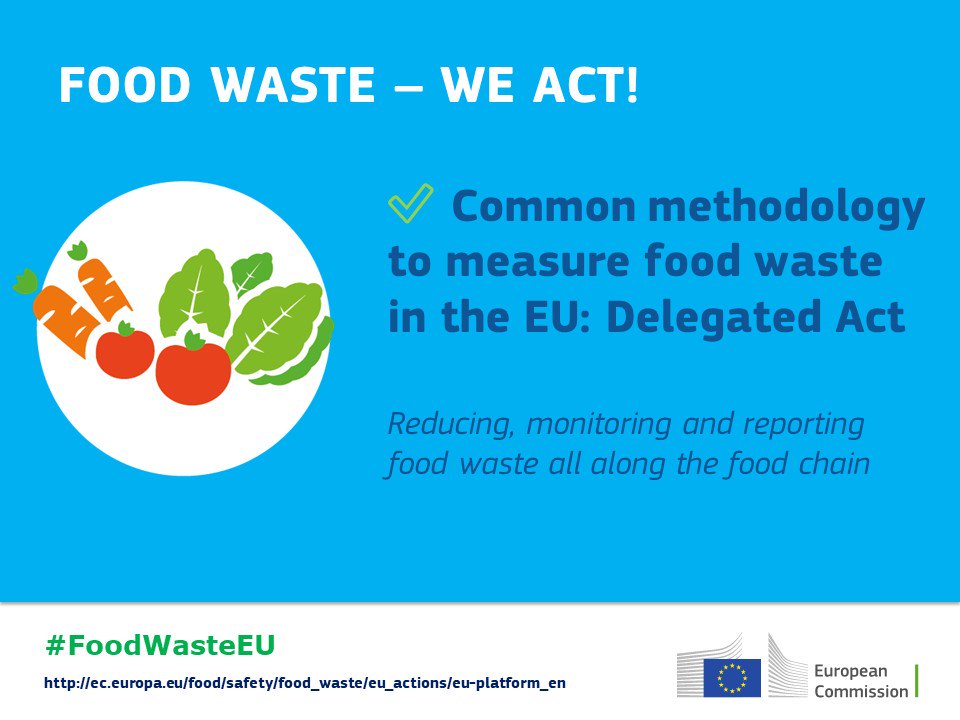 On the 6 May Freshfel Europe Communications Manager and Policy Advisor Nicola Pisano attended the sixth EU Platform on Food Losses and Food Waste meeting in Brussels. This latest Platform meeting focused on presenting the European Commission’s Delegated Decision on food waste measurement, food donation guidelines progress and food waste prevention actions. European Commission Vice-President Jyrki Katainen opened the Platform meeting on behalf of Health Commissioner Andriukaitis insisting that “business as usual” was not enough to deal with the “many, inter-related & competing challenges faced by our food systems.” He reminded the Platform members that the 2015 Circular Economy Action Plan had identified food waste prevention “as a priority area for action” and that the EU was committed to “being a leading force in the global fight against food loss.” Of note, the European Commission presented and explained its Delegated Decision on a common methodology and minimum quality requirements for the uniform measurement of levels of food waste, which was adopted on 3 May. This has been touted as the world’s first comprehensive food waste measurement methodology. All the presentations and recording of the live-streaming of the Platform meeting are available here.

Freshfel Europe hosts delegation of vegetable traders from the Balkans

Since December 2018 Freshfel has supported the ITC/GIZ led project on trade facilitation in the CEFTA area with a specific focus on trade barriers for vegetable trade. The vegetable sectors of the six participating countries Albania, Montenegro, Macedonia, Bosnia-Herzegovina, Serbia and Kosovo, face manifold hurdles at border crossing points when trading in the region despite an FTA being in place. Therefore key aspect of the project is to address these barriers to policy makers in the region while improving the public private dialogue. Freshfel Europe, led by Policy Advisor on Trade and Communications Nelli Hajdu, organised a study trip from the 13-17 May 2019 to Brussels aimed at introducing Freshfel Europe’s working environment as well as to give the delegates a feeling of the interplay between policy makers and business organisations. The visit included meetings with DG Agri, DG Trade and DG Santé as well as at the European Parliament and a presentation on the Joint Transparency Register of the European Commission and the European Parliament. At the center of the visit were SPS topics as well as official control and customs operations and food safety, which are at the center of harmonisation endeavours of the sector as they are the key obstacles to seamless cross-border trade in the region. 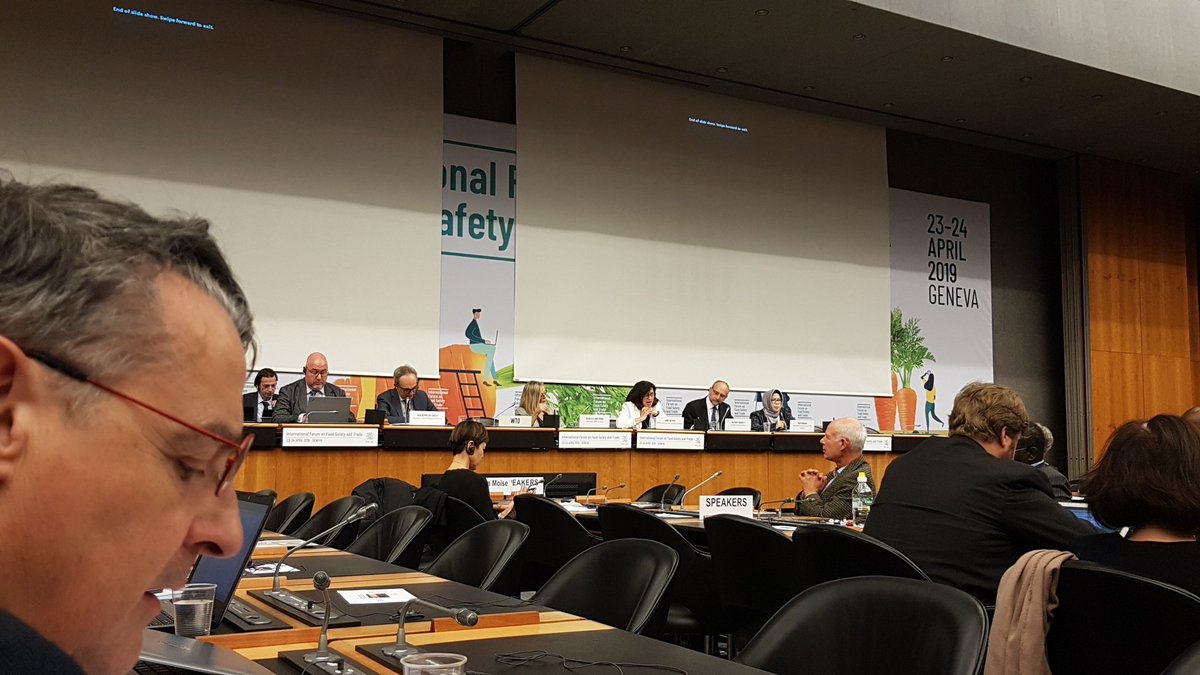 Freshfel Europe attended the WTO International Forum on Food Safety and Trade on the 23–24 April 2019 in Geneva, which covered three key topics impacting the future direction of food safety matters. The conference gathered public and private leaders from all around the globe and aimed at finding consensus for developed and less developed countries on digitalization and its impact on food safety and trade, to create synergies between food safety and trade facilitation and the promotion of harmonized food safety regulations and standard setting. Key messages were focused on international standard setting and in particular that this method will be crucial to ensure a global trading environment for food products. Also, cooperation between customs and SPS agencies at border crossing points will need to be improved in the future to allow faster trade and better integration of less developed countries into the supply chain. With regard to digitalization, it was underlined that so far agri-food businesses, traders and growers have not yet grasped the real value of digitization along the food chain, in particular for fast tracking of crisis responses. Freshfel Europe warned the panelists that the manifold private, public and public-private initiatives should be improved to create a constructive environment to make use of digital benefits and not further foster fragmentation of initiatives.

On 7 May 2019 Freshfel Europe’s Agricultural Policy Advisor Helene Deruwe participated in the Civil Dialogue Group on Organic Farming, during which the European Commission updated participants on the ongoing discussions about the new Organic Regulation and their secondary legislation. These discussions are held with the Member States on the level of production, controls, labeling, trade, and product use. During the meeting, the Commission staff and external speakers put the spotlight, on the state of organic imports into the EU and organic farming inside the EU. They also provided information about the latest developments in Brexit, upon which Freshfel Europe requested for additional clarification as to what will happen to imports of organic fruit from third countries, currently importing via the UK. The Commission services are currently investigating this issue with their legal team. 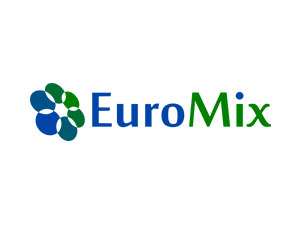 Finalisation of the EuroMix project

For four years Freshfel Europe was involved in the EuroMix project, which came to its end on 15 May 2019. The project is considered as being very successful as the aim of the project, developing a tool to deliver a mixture test strategy and test instruments using novel techniques, was achieved. The tests resulted in data needed for refining future risk assessment of mixtures relevant to national food safety authorities, public health institutes, the European Food Safety Authority (EFSA), the European Chemical Agency (ECHA), industry, regulatory bodies and other stakeholders. All of this data provides information for future risk management decisions on the safety of chemicals in mixtures to be taken by the European Commission and the Codex Alimentarius. Freshfel Europe participated in the diverse project consortium as one of the disseminators, in particular forming the link between scientists and industry. The project held a Stakeholder Workshop in Brussels on 26-27 March 2019 and a final lecture was given at Freshfel Europe’s Food Quality Meeting, where members were informed of the outcome of the project and future possibilities for the project results. More information about EuroMix is available here.

Update on ‘FV for a Healthy EU’ promotion programme

Since 1 January 2019, Freshfel Europe and Aprifel, the French Agency for Research and Information about fruit and vegetables, have been involved in an EU Promotion programme to enhance the awareness of the benefits of eating fruit and vegetables among 18 to 30-year-olds, so-called millennials, with the ultimate goal to stimulate consumption of fruit and vegetables among that age group. Together with the creative and implementing agencies, Abracabéa and APCO, the consortium has designed the look and feel of the campaign, and is organising the implementation of the different actions for the next three years. The campaign will mainly be conducted online via involvement of e-influencers, bloggers and vloggers, on YouTube, Instagram, Facebook and Twitter. Via these platforms influencers will amplify the inspirational messages for the campaign. The programme will also host a website that will display all the programme content and the campaign team will be present at two events per year in France. The official launch of the campaign will take place at the Eurockéennes festival in Belfort, France on 4 July 2019. More information about the launch and the programme will follow soon and will be available on Freshfel Europe’s website.

EU-Africa trade flows of fruit and vegetables and other business relations are key to ensuring the economic sustainability of the sector and a year-long supply of fresh produce for both European and African consumers. Aware of the importance to maintain and further foster this co-beneficial relationship, Freshfel Europe answered to the European Commission’s call for feedback on the agri-food and rural agenda of the Africa-Europe alliance, following the publication of the Task Force for Rural Africa report. In our response providing perspective from the fruit and vegetable sector, Freshfel Europe welcomed the EU’s ambition to deepen relations with Africa in the area of agri-food and highlighted the need to ensure that such a relationship is built towards securing market access and the protection of Food Safety and SPS standards.